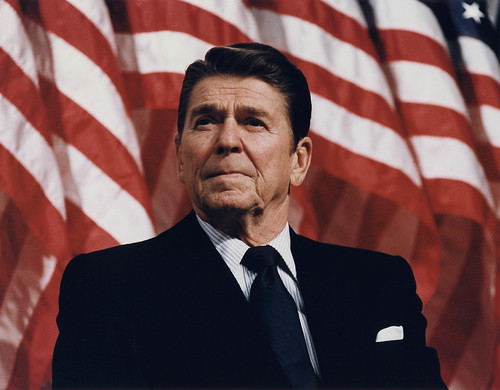 Growing up in the 80’s I had the role of President played by an actor.   Ronald Reagan became the person I identified with as my President.   And because I lived in California at the time of the election, I always viewed him as a popular president.   Reagan defeating Jimmy Carter was the first election I can remember.   When I asked why Reagan was so popular, I was told that Carter hadn’t really accomplished much in his time in office.   There was a dramatic hostage situation, gas shortage lead to a lot of stress, and the cold was on everyone’s mind.

Four years later Reagan was challenged by Walter Mondale.   The economy was strong, the cold war was turning in our favor, and we had just kicked some serious ass in the Olympics.   I can remember an incredible amount of pride in America that I didn’t sense before Reagan.   Walter Mondale went on to get one of the biggest beat downs in political history, losing 49 out of 50 states.   Between Carter and Mondale I now had an idea of who Democrats were.   They were losers.

Backlash is the side dish of popularity, and Reagan was no exception.   There is no doubt that Ronald Reagan’s second term was not as smooth as the first.   The economy was having a negative reaction to all the games being played.   There was the Iran contra scandal.   Secret wars in Central America were being questioned.   As a teenager I began to see some of the flaws in my president.

The election was coming up, and Reagan would have to relinquish office.   I had never paid much attention to George Bush.   I mostly thought of him as the vice-president who used to run the CIA, so it’s funny that he denied knowing anything about the Iranian issues.   I didn’t trust him.   He wasn’t my president.

Ronald Reagan didn’t seem to be in a hurry to endorse Bush.   But with what I saw of the Democrat circus, I wasn’t too concerned about seeing a non-Republican White House.   I think this was the first time I started to view myself as a Republican.

Gary Hart was the front runner for the Democrats, right up until the famous picture of him sitting with his girlfriend, an ex-model nearly half his age, appeared.   I now had a better idea of who Democrats were.   They were losers with no ethics.

Hart decided to “let the people” decide and stayed in the race.   The people gave him 4% of the vote.   Instead of Gary Hart, the Democrats ran Michael Dukakis.   But between Michael Dukakis’s weak stance on crime, and the fact his wife was a known American flag burner, Dukakis was taking a lot of heat.   The final blow to his campaign was when his people decided that Michael Dukakis needed to show the world he could command the military, and some excellent footage was shot with Michael Dukakis driving a tank, looking more like Snoopy shooting down the Red Baron than the Commander and Chief.

At the Republican Convention Ronald Reagan finally got behind George Bush with one of the most memorable speeches in my memory,The George Was There speech.   The speech ended and I think for the first time I, and many people at the convention realized what we were losing.   The chants of four more years drowned out everything else for quite a while.   I think this was the first time I felt something emotional in politics.

Ronald Reagan was not our greatest president, he made plenty of mistakes.   Some of his economic policies were short-sighted.   It could be seriously argued that his failure to address AIDS helped the disease spread.   Some of his cutbacks resulted in thousands of mentally ill being made homeless.   But having gone through those times, I will say that I think he was the president we needed for the time.

Ronald Reagan came into office when I as 9 years old.   I was an adult when my president left office.   In those 8 years, from my view, he did what he said he would do.   I watched the the world change from my TV through those years.   From talking about the hostages in Iran, to letting us know we were “bombing” the Russians in 1984.   From “Go ahead, make my day”, to “Mr. Gorbachev, tear this wall down”.   From “he counted on us to be passive.   He counted wrong.” to “George was there”.   Ronald Reagan was my president, and still holds the image in my mind for the word president.

I never really cared much for George Bush.   There was nothing specific I could point to before his presidency, I just didn’t get a good feeling looking at him. After Panama and Desert Storm I decided that I didn’t like this president very much, and I was ready for a change.   But then I saw Bill Clinton.

At this point what I had learned about Democrats was Reagan used to be one, but “they left him”, they were losers, and their morals were in the toilet.   Just to be clear, I’m not at all religious, so I have no love of the right-wing ultra conservative.   I’m pro-choice, against the death penalty and think that religion has no place in our schools other than a non-biased look into history and social studies.   But Bill Clinton looked like scum bag from day 1 to me.   He had this smirk on his face that just seemed to come from getting away with a lot.

Before the election we learned that he smoked pot, dodged the draft, and cheated on his wife.   All things that should have knocked him out of the running, but somehow didn’t have any real impact.   The country had decided that because he was from the 60’s, we should all be cool with it.   I could have been cool with it, if he would have admitted these things on his own.   Instead we got “I didn’t inhale”, “I never got the notice” and countless lies about cheating on his wife.

I didn’t know much about Al Gore, but I remembered Tipper Gore waiving around Twisted Sister records with the PMRC, complaining about how they are effecting our youth.   I didn’t object to labeling records, I just thought it was funny that she took Twisted Sister much more seriously than anyone else.   They were a one hit wonder novelty act, and she acted like they were leading the charge in corruption.

I watched Clinton smirk his way through the campaign process.   He played the sax on Arsenio, talked about his underwear on MTV, and held his wife’s hand on Barbara Walters.     He was all things to all people.   So I learned something else about Democrats, they pander.

Clinton had a decisive win over Bush.   Fleetwood Mac music played over his inauguration as he danced with his wife on stage.   The country was hopeful that this would be a positive change, and even I was trying to be optimistic.

Over the next 8 years I learned more about Democrats.   They don’t know how to run the military.   Their pandering leads to partisan politics.   They have high turnover in their administration.   They are weak on foreign policy.   The final straw for me was the way he treated the soldiers from the battle of Mogadishu.   It was clear to me a man with such little respect for our soldiers had no business in the White House.

After four years of this, I was ready for a change.   But unfortunately the Republicans decided to run the oldest guy they could dig up, and to run his campaign on “family values”, which sounded an awful lot to this country like anti-abortion and no gay marriages.   Bob Dole failed to win the hearts of voters, but did manage to score a gig as the pitchman for Viagra.

Four more years of Clinton brought us the Monica Lewinsky scandal and his weak foreign policy led terrorists to our door.   The economy boomed under Clinton, but having spent a good part of the 90’s in Silicon Valley, I don’t know how much Bill Clinton had to do with that.

After his two terms Clinton had earned his smirk.   He was truly the cat who at the canary.   He got away with a lot, and walked out a winner.   It seemed the only person to pay the political price for his antics was Al Gore when he (kinda) lost the election to George W. Bush in 2000.

I won’t get into the last 8 years, we all know the hell we have gone through.   People are losing jobs and their houses.   We are stuck in a war that should have never happened.   We have thousands of our soldiers dead and tens of thousands of them wounded.   We have destroyed a country, and in the end will spend over a trillion dollars doing it.   And while we do this Osama bin laden is laughing at us.

George Bush is so anti-environment, the man took down the solar panels from the White House.

The people of this country are going through incredibly tough financial times.   It seems the only people doing well financially are oil men like Bush and war profiteers like Dick Cheney.   I firmly believe that Cheney, Rove and Bush have committed treason and numerous war crimes.   It ‘s a shame their only punishment will be their legacy of shame, a shame we will all have to burden in our history.   How I’m not sure George W. Bush is the technically worst president we have ever had, I do think he is the most treasonous.

I won’t get into this election right now other than to say I’m an Obama supporter, and that this primary is reminding me of why I never liked Democrats.   Allow me to sum up what I learned about Democrats over my life.

They are losers, they have no morals, they lie, they pander, they have weak foreign policy, they don’t understand military, they aggravate partisan politics and they have high turn over.   You can now add to this that they eat their own and they divide even their own party.

I don’t see my membership in the Democratic party lasting long.   If Hillary Clinton can play the political game and take away the nomination from Obama, then there is really not much that can be salvaged with the Democrats.   It’s a party who can’t even run itself, so why should it run the country.   The latest attempt by the Clinton camp to seat delegates where Obama wasn’t even on the ballot is just another example of the Democrat logic.   But you can’t blame the Clintons alone.   Let us not forget the number of spineless super-delegates who sit back and do nothing.

So what’s a guy with no political party to do?   Maybe I’ll just stay home on election day.   Or maybe this is Ralph Nader’s year.   The one thing I know for certain is that my president is long gone.