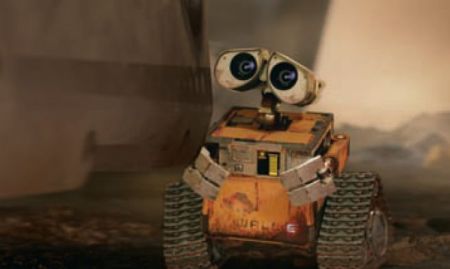 Having spent my college summers working at Disneyland, as well as being a parent, I have first hand knowledge of the Disney merchandising machine. We were told in Disney U, the week long training program every Disneyland employee goes through, that the very appearance of Mickey Mouse on a t-shirt increases the value by $15.

On a side note we were also informed that there is not such thing as a “stuffed” Mickey, only a “plush” Mickey. Nobody stuffs the mouse!

My son was barely 2 years old when Toy Story came out. He of course had his own Buzz and Woody, along with just about every other character. But now Disney is releasing what must be a merchandising guys’ we dream. Wall-E.

Wall-E centers around a very cute robot who is all alone in the world, except for his friend…a cricket. The trailer looks like it’s going to be a lot of fun for kids, and Wall-E himself is like a robot ET.

Of course this means that every child under the age of 5 is going to need their own Wall-E, and I’m sure Disney will be more than happy to oblige. Above is a video, it appears to be from Disneyland or Disney World from the name tag of the man in the video, of a real life walking (we…rolling) and talking (if you can call it that) Wall-E.

How I’m sure this is not for sale, I’m sure it’s a glimpse of what might be coming.