I can clearly remember being 12 years old and waiting in line for hours to see Indiana Jones and the Temple of Doom.   Now 24 years later I got to bring my son.   Fortunately no real line this time.   Much like the feeling I got when I took him to see The Phantom Menace, it felt like a circle being completed.

Unlike The Phantom Menace, Indiana Jones and the Kingdom of the Crystal Skull, the movie didn’t suck.   Although I liked Phantom Menace more than most (Darth Maul kicked ass), it was a little disappointing.   The edge for Indiana Jones is that, unlike Star Wars, Harrison Ford is still in the picture, and he is great as always.   I like that they kept the formula very similar to the past films.   The movie starts out fast and keeps going. 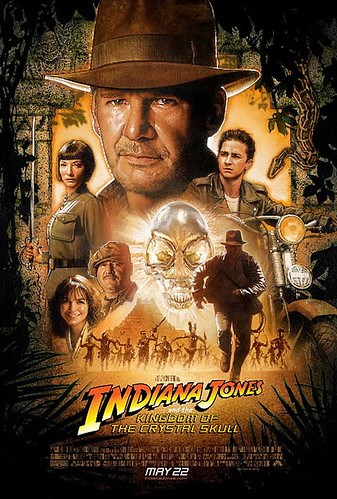 The plot line is a bit weak, but I’m not sure any weaker than Temple of Doom.   I think I’m just a little more jaded than I was at 12.   But Indiana Jones movies are not plot driven.   Plot lines are just an excuse for Indy to travel the world in and get into trouble, which he did wonderfully here.

The cast was really strong.   It was great to see Karen Allen back as Marion Ravenwood.   She has aged as well as Harrison.   They both look great considering it’s been 27 years later.   Cate Blanchett does a great job as the creepy psychic Russian.   But I do think they didn’t develop out the character as much as they should have.   We got feeling that this is someone not to mess with, but we never saw her do anything extraordinary.

John Hurt, who always does a good job, did a great job as Professor Oxely.   There isn’t much of a back story to him, which made the character seem a bit out of place since we have such a story with Indy and Marion.   I would have preferred to see them bring John Rhys-Davies back as Sallah.   He was such a critical part of Raiders of the Lost Ark and The Last Crusade. There was a great mention of “Marcus” (he even has a small part of sorts), who was played by Denholm Elliot.   He was also in Raiders and Last Crusade, but no mention of Sallah. 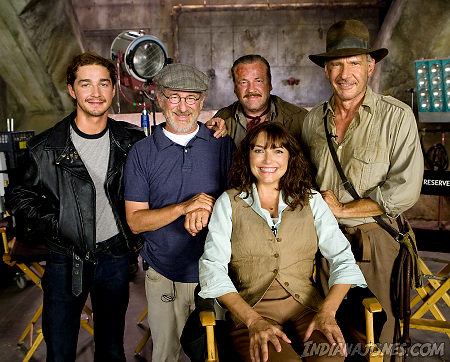 Then there is Shia LeBeouf.   I don’t want to say Shia did a bad job in the movie, he was fine, but I really hope they don’t try to put him in the Indy roll in the future.   I just don’t buy him as the adventure seeking archaeologist.   George Lucas has brought up the idea of Shia taking over, and doing a transition movie where Harrison plays a small part that would be similar to the Sean Connery role in Last Crusade.   I really don’t think Shia could pull it off.   It’s a shame because I love the idea of the franchise moving forward, but if there is one area where Lucas let us down it’s continuing a franchise without the original players.

On a side note, I find it amazing that Shia was born about 6 years after Indiana Jones first came to screens.   That makes me feel very old.

Overall the film was a lot of fun.   I don’t know if I can say it’s as much fun as the earlier films, but I have so much nostalgia mixed in with those films it’s hard to be unbiased.   But it’s not really a competition, so everyone should still see the movie.