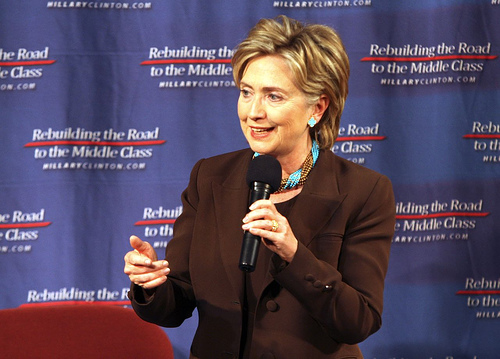 Hillary Clinton is not an honest woman.   But no one can accuse her of being a flip-flopper.   Okay, maybe she flip-fops on issues like Iraq by voting for the war, voting to not fund the war, disagreeing with the war she voted for, but never admitting she made a bad vote.   And maybe she flip-flopped on the whole Florida and Michigan thing when she said they didn’t count, then we should count every vote.   Of course counting every vote doesn’t include caucus states, at least in Clinton math.   But she will not flip-flop on conceding….maybe.

There are those, like political analysts, who would say that Clinton really lost this race after Super Tuesday.   But Hillary has about as much faith in political analysts on politics as she does economists on the economy.   Only she knows the truth…mostly because, as we learned with Bill Clinton’s administration, they like to manufacturer their own.

“I did not sleep with that woman”, “I didn’t inhale”, “I never got my draft notice”, etc…   In Hillary’s campaign, we didn’t know the truth abut what happened in Bosnia until she told us.   The truth is just one big Wiki for the Clintons, and only they have the password.

But there is something to be said for consistency, especially about your unwillingness to go down.

Senator Clinton has called for a big speech tonight, and asked her supporters to come.   Her schedule shows no activity after then.   Her campaigners were offered their tickets to go home.   Even Bill Clinton, should we decide to believe him, has said that yesterday may be his last day in this type of campaign.   It’s over.

But wait, not according to Terry McAuliffe, lead mouthpiece for the Clinton campaign.   He says that all these stories by so-called “news agencies” like AP are false.   Hillary Clinton will continue to fight on!

Watching Terry McAuliffe is like watching that Minister of Information guy from Iraq during the invasion who kept telling people that the U.S. has been driven out, while you hear the bombs in the background.   It must be a talent of some sort to keep looking the county in the proverbial eye and lying.   Where would someone with that talent find a job?   Oh, yeah.

My guess is that Hillary is going to go on television tonight and suspend her campaign, while continuing to fight in the background.   And I’m guessing that the fight will include people having to go to HillaryClinton.com to donate.   Anyone else find the constant begging for money sad?

In the final throes of death, the Clintons will go out of this campaign doing what they do best.   Saying something they know to be false to try to appease their own ego.   The 6 month ass beating they took from Barack Obama has taught them nothing about how the old political tricks don’t work on public who have finally caught on to the political game.   In the end Hillary was left with her core “uneducated”, and according to the Vice-President, inbreeding, Americans.   Thankfully John McCain is a slow learner too.