Update: Check out pictures of the best booth at AVN, the hottest women at AVN, some interesting products at AVN.  Also, check out my article on Sasha Grey.

The event coincides with the biggest trade show in Las Vegas, the Consumer Electronic Show, or CES.   And every year, the show gets bigger and bigger.

I first attended AVN back in 2000.   I knew a couple people who worked in the adult space who said that AVN was a blast, so Shaun and I decided that it would make a good excuse to head to Vegas for a couple days.

This was the first event I attended at the Sands Convention Center, so I didn’t realize how the layout worked.   When we walked in the front doors, I was amazed at what I saw. There were dozens on beautiful young ladies running around in sexy outfits.   Many of them were wearing leotards, some with little wings and make up like they were ferries.   I thought that was cool touch.

As we walked through the sea of nubile beauties, I started to notice something.   “Some of these girls look really young.” I said to Shaun.   He agreed, but we just kept scoping out the action as we wondered around looking for registration.   It was a few feet later that we noticed the sign.   There was evidently a “Jr. Dance Competition” taking place in the Sands at the same time.   So we had been checking out teenage girls there for dancing. 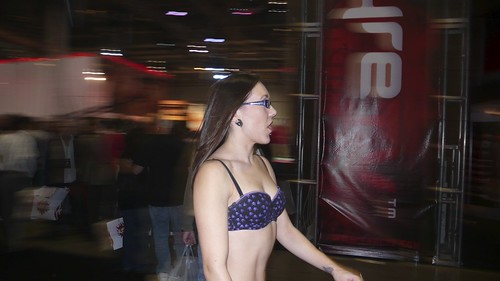 So we were a couple of pervs I guess, but who the hell thought it was good idea to put these two events together?   God knows how many innocent young ladies were exposed to the highly lucrative world of adult entertainment that day.   Hell, some of them were probably working the booths today.

But this is my third AVN, so I’m an old hat now.   Now that I have some experience on the other side of trade shows, exhibiting, I can’t help but notice other peoples’ trade show booths.   I know from experience that trade show booths are expensive.   I paid over $5k on a little pop-up booth for USWeb.   They had one booth at AVN this year that was made to look like an old prison, completely with barbed wire and a guard tower.   These booths must cost nearly six figures, not to mention the cost of the space.   There is good money in recording people having sex.

There were a lot of mostly naked women at the show, which is always a good thing because I not have a lot of pictures of naked women at AVN.  It feels weird to just take a picture of a naked woman in public.  But  weird  I mean dirty.  I can’t help but think ad:tech could take some lessons from AVN.   They already have booth babes, but I don’t remember seeing them on an actual stripper poll.   AVN has that covered.

I saw a couple cool businesses at AVN, but the place was too packed to really talk to anyone.   But I will follow up with them after the show.   I also took some pics, but as my photography tutor recommended, I took them in Raw, so I have to edit them before I put them up.   I’ll add them soon.

If you ever get the chance to check out AVN, you should do so.   It’s always interesting to see how big that business really is.