Filthy Lucre
Home Learn Entertainment What is the deal with all the pirated DVDÃ¢â‚¬â„¢s in Hong Kong?
Facebook
Twitter 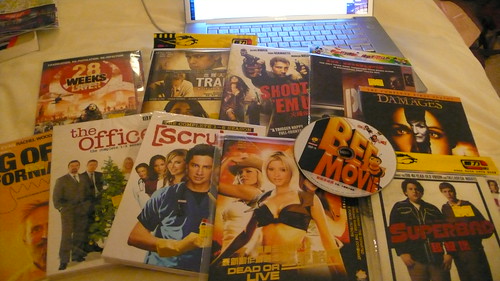 After a quick trip to the Temple Street Night Market in Hong Kong, I was able to easily find a store selling hundreds of pirated DVDÃ¢â‚¬â„¢s. They had everything from the number one movie right now, Bee Movie, to TV shows that just wrapped up the season like Californication, and even movies that are not yet released like Trade. Just about everything you could want, they have.

I was curious if these movies would actually work, so I decided to try them out for myself. I purchased Bee Movie and tossed in my Macbook Pro. It worked just fine. I did notice a small jump about 15 minutes into the film. It seemed to jump about 20 seconds, but that was the only time. My cousin picked up a few television series to try out. He noticed on Stargate SG1 (HeÃ¢â‚¬â„¢s a geek) that disc 3 didnÃ¢â‚¬â„¢t play. But that could be more of an issue with the Macbook Pro than the DVD itself. We will have to do more testing when we get home.

Other than that, the movies appear to be a little less than normal DVD quality. Obviously we donÃ¢â‚¬â„¢t have a full surround sound system to try out 5.1 or anything, but the sound appears to at least in in stereo.

The packaging is pretty funny. They come in flat packs with images taken usually from the poster or other DVD set. The text rarely matches the film correctly. For example, the FX TV show damages is described on the front as Ã¢â‚¬Å“A Good-Hearted Tween ComedyÃ¢â‚¬ , and the quote on Clive OwenÃ¢â‚¬â„¢s Shoot Ã¢â‚¬Ëœem Up is Ã¢â‚¬Å“Reese Witherspoon is AmericaÃ¢â‚¬â„¢s Movie SweetheartÃ¢â‚¬ . Reese Witherspoon is not in this film. 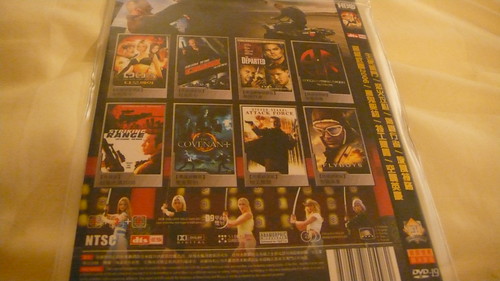 Another interesting feature of some of these DVDÃ¢â‚¬â„¢s is that they often donÃ¢â‚¬â„¢t just contain one movie. For example the DVD for Dead or Alive (as I said, heÃ¢â‚¬â„¢s a geek) contains not just DOA, but also Crank, The Departed, Storm Breaker, Striking Range, The Covenant, Attack Force, and Flyboys. A pretty good deal for about $3 US.

Most of the DVDÃ¢â‚¬â„¢s we purchased were about $3 US each. The box sets of TV shows ranged anywhere from $5 – $10 US. These are pre-haggle dollars, so you can probably save about 20% with some good back and forth.

I donÃ¢â‚¬â„¢t know the laws regarding customs, so IÃ¢â‚¬â„¢m not going to try to bring a lot of these back to the US with me. I get the feeling that they would just be confiscated. But I may bring a couple for the 14 hour plane ride home. I can knock out the entire British version of the Office in that time!