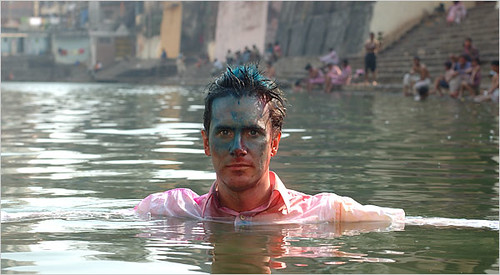 When reviewing the films that were going to be at this years Ashland Independent Film Festival, Outsourced was one of the few with a trailer on AppleÃ¢â‚¬â„¢s site.Ã‚   The trailer was great, and it was one of the movies I was most looking forward to seeing. Ã‚

Outsourced, directed by John Jeffcoat, centers around Todd, a Corporate VIce President who learns that his Seattle based call center is being outsourced to India.Ã‚   To save his own job Todd must head to India and train his replacements.Ã‚   While there Todd meets people that he comes to genuinely care about, including a young female call center employee.

IÃ¢â‚¬â„¢m not a big fan of romantic comedies.Ã‚   They are usually formulaic by nature.Ã‚   Boy meets girl, they end up together, but the writer has to come up with some (hopefully) clever way to keep them apart for a couple hours.Ã‚   When it works well you have something amazing, like When Harry Met Sally.Ã‚   When it doesnÃ¢â‚¬â„¢t you end up with something often staring Kate Hudson.Ã‚   But this isnÃ¢â‚¬â„¢t the formula Outsourced follows.

ThatÃ¢â‚¬â„¢s not to say Outsourced doesnÃ¢â‚¬â„¢t follow a formula.Ã‚   ItÃ¢â‚¬â„¢s the fish out of water that learns to accept and love the place he has been resisting, often with the help of a love interest formula.Ã‚   But just like the rom-com formula, when this is done right you have something wonderful. And Outsourced does a couple things to make it rise above the formula.

First off, the writing is sharp and intelligent.Ã‚   It doesnÃ¢â‚¬â„¢t dumb down the situations Todd finds himself in.Ã‚   This may stem from the fact that Jeffcoat has done a lot of traveling and seems like someone who appreciates foreign culture himself.Ã‚   ItÃ¢â‚¬â„¢s easy to see where a lesser film would spend half of the movie taking cheap shots at Indian stereotypes.Ã‚   But Outsourced finds the humor in the differences between our cultures, and makes as much fun of Americans as it does Indians.

I also like the subtle way the subject of outsourcing of American jobs is handled.Ã‚   The writers do a good job showing how the jobs sent overseas are needed and appreciated.Ã‚   ItÃ¢â‚¬â„¢s not that they are saying that its okay for Americans to lose jobs, but they do show where the responsibility of those decisions sits.

Josh Hamilton, whom I havenÃ¢â‚¬â„¢t seen since playing Parker PoseyÃ¢â‚¬â„¢s way to close twin brother, does a great job as Todd.Ã‚   He fit the role well and brought the right style for the dialogue to work.Ã‚   The writing reminded me a little Noah Baumbach but that may be because Hamilton was in BaumbachÃ¢â‚¬â„¢s classic Kicking and Screaming.Ã‚   Some of his dialogue reminded me of the scene in Kicking and Screaming where he complains about Prague and tries to remember if Prague is known for beer of coffee.

I was lucky enough to grab a DVD of the film that IÃ¢â‚¬â„¢m looking forward to showing friends.Ã‚   If you get the chance to see the film at theaters, you should.Ã‚   But you can also buy it direct from the Outsourced website.Ã‚   On a scale of 1 – 5, I would give Outsourced a 4.