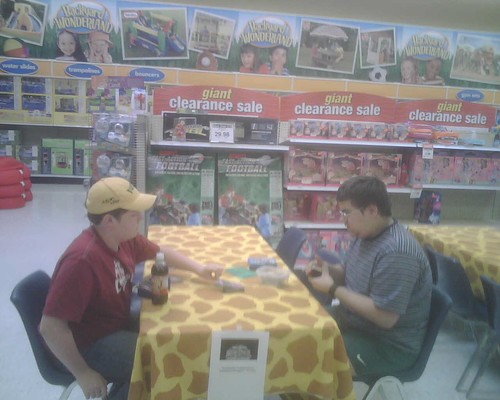 Michael (he’s the one in the yellow hat) had his first Yu-gi-oh duel last weekend at Toys R Us. It was a very small turn out with only 4 people, but he won. For those of you who do not know what this is, it’s a trading card game with monster that fight each other. It’s like Pokemon or Magic.
He had a really great time and got a free DVD, poster, card and a patch for winning. Since he has been collecting these cards for years, it was good to finally watch him get to play against a real person. He plays the games on his PSP and Gameboy, but it’s not really the same.

His next duel in early next month. As the returning champion he gets to stay in his seat while other players rotate in to play against him.