Today I received the DVD of one my favorite films from this years’ SXSW, Dance of the Dead.   Dance of the Dead was one of the movies that I wasn’t sure I would catch, but I had heard from a few people that it was “supposed to be pretty good”.   The well earned reaction of the audience I was part of was well beyond “pretty good”.   It was more like sheer exhilaration.   The film is a roller-coaster from beginning to end, and bound to be a cult classic.

While Dance of the Dead featured a lot of new faces, Otis featured a team of veteran actors, including Kevin Pollack, Daniel Stern, and Illeana Douglas.   Even the 23 year old female lead, the beautiful Ashley Johnson, had been working since she was 9.   The entire cast did great, especially Johnson, yet it was the two newcomers that most of us walked away talking about; Bostin Christopher and Jared Kusnitz. 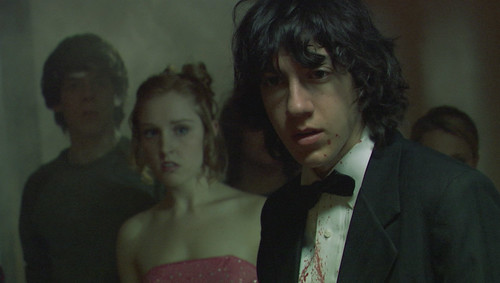 There are a lot of talented young actors breaking through right now.   Actors like Shia Lebeouf and Emile Hirsh have went on to be huge stars.   But if I was to put money on who may be part of the next group of talented young actors to make it big, I would find Jared Kusnitz to be a very safe bet.   He has a  screen presence  that combines the geekyness of Michael Cera with the serious undertone of Paul Dano.   Jared Kusnitz comes across as the quintessential smarts ass, who always seems to be a little cooler than everyone else on the screen, much like a Jason Bateman or John Cusak.

And it appears that the people I hung out with at SXSW were not the only ones to notice Kusnitz.  The CW has cast Jared in their new Bob Saget show, Surviving Suburbia.   From what I understand, this will be nothing like Full House, which is good because Jared would not be a good fit with the Tanner clan.

Both Otis and Dance of the Dead went directly to DVD (which is a real shame because Dance of the Dead was awesome on the big screen), so Jared hasn’t received wide exposure yet.   But with the CW show, I’m expecting to see and hear a lot more about him.

I emailed Jared a few questions about his work with Dance of the Dead.   His answers are below.

Ed: How did you get involved with Dance of the Dead?

Jared: As with any other audition Dance of the Dead came out on Breakdown Services, my agent submitted me in hopes they would want to have me audition. I was in Florida at the time so I was asked to put my audition on tape. My family helped me set up some stage lights and a video camera, and my mom read with me on film. I submitted the audition via email and a few weeks later I got the call that they wanted me to come up to Georgia for a callback. During the callback, we went off-book into improv territory and I was being thrown curve balls but I just had to stay in the moment and listen to the casting director. After the callback I was asked to go to a “stunt” audition. I’d never done any form of a stunt before so I was nervous. They had us kicking and punching these hard rubber dummies and swinging baseball bats at them with full force, but then also pulling back on some of the hits so that they look real but would not do any damage. I was in a great deal of pain the day after but it was worth it because about a month later I got word that I was going to be playing Jimmy Dunn in Dance of the Dead, and the physicality of the stunt audition was NOTHING compared to stunt TRAINING…

Ed: Were you a fan of the horror genre?   What’s your favorite horror movie?

Jared: I love psychological thrillers and it just so happens that SAW falls into that category. Those movies go beyond the violence and leave the audience questioning their self as to why they felt compassion for the bad guy. I’m also a big fan of the Hitchcock films, such as North by Northwest, Vertigo, Rear Window, and Strangers on a Train. Strangers on a Train is a superb film, extremely well executed and really great, chilling performances.

Ed: Of the cast and crew of Dance of the Dead, who would you most like
to work with again?   And the same question for Otis.

Jared: Of the cast and crew of Dance of the Dead I would be thrilled to work with everyone again. Gregg Bishop (director) and Joe Ballarini (writer) are two of the most easy going, and fun spirited guys I’ve ever worked with and known, and they have HUGE careers ahead of them.  I can say I knew them when… same with the cast. Such a well rounded group of kids and we all had such a blast getting to know each other and make such a kick ass movie together!! I hope to work with some of them in the future. As far as Otis goes, I felt like such a fish out of water. I mean here I am, a relative unknown, working alongside Daniel Stern, whom was a big part of my childhood with his role as Marv in Home Alone, Illeana Douglas who was in one of my favorite “gangster” movies of all time GOODFELLAS, Kevin freakin’ Pollak who is in my favorite film of all time THE USUAL SUSPECTS, and Ashley Johnson whom I also watched while growing up, on GROWING PAINS. Working with them was a dream come true and I learned so much from watching their work process. I can’t forget to mention Bostin Christopher who played Otis and Tony Krantz who directed the film. Bostin is this looming presence with the biggest heart. His performance was mesmerizing, and I said to Tony “its amazing he’s scary and sweet in the same sentence!”. Tony is a humble, soft spoken director who knows what he wants and he knows how to get it out of his actors, and working with any of the cast and crew from both films would be very welcomed.

Ed: What was the biggest challenge in shooting a horror movie vs. your
past films?

Jared: The biggest challenge in shooting a horror movie, is keeping the threat level so high, to the point where you could die at any second. Once the fear is gone from the actors performance, the audience doesn’t feel the fear either. Gregg and Joe were constantly reminding us that there were “zombinos” as they so called them, that could strike at any moment. With the job that Toby Sells special FX shop did on our zombies, part of my challenge was eliminated and i was genuinely on edge.

Ed: Both Dance of the Dead and Otis were admitted to SXSW, and had  great reviews from everyone who saw it.   Did you enjoy SXSW?

Jared: I very much enjoyed SXSW. The atmosphere in Austin, Texas and just the fact that TWO movies I did made it to a film festival was enough for me. My favorite moment of the festival was our premiere. We packed the house and the movie started and everyone was clearly along for the ride, gasping and laughing at all the points we wanted them too. It was so rewarding.

Ed: While at SXSW, did you see any other films, and if so, which was your favorite?

Jared: Unfortunately I wasn’t able to stay long enough to see any other films because I had a prior commitment in Los Angeles.

Ed: Everyone who saw Dance of the Dead thought for certain it would get a theatrical release, were you surprised that it didn’t?

Jared: I was shocked that we didn’t get a theatrical release, but at the same time Lionsgate/Ghosthouse,know what they are doing, and I believe that we will find our audience and become a cult classic. A theatrical release can come a few years from now when its developed a fan base like the Rocky Horror Picture Show 🙂

Ed: The story left an opening for a sequel. Do you think it?s likely?

Jared: I agree that the story did leave an opening for a sequel and if they want to write one, I will surely do it! Zomedy is BACK!!

Ed: The Otis DVD has an alternate ending, which did you like better?

Jared: Both endings are vastly different. The theatrical ending leaves a lot open for discussion, where as the alternate leaves little to the imagination. Shooting both of them were a blast…hahhaha….literally! The alternate ending was a really fun shoot. I remember one take, Illeana spits cake into my lap and I’m doing my best to stifle my laughter. Brass tax, i like the original because i got to blow holes in a door with a shotgun!

Ed: Are you working on any new projects right now?

Jared: Right now I am working as a series regular on the new CW series “Surviving Suburbia” with Bob Saget, Cynthia Stevenson, G Hannelius, and Jere Burns…yes Agent Hotchkiss. I play Bob and Cynthia’s son, Henry Patterson, the somewhat straight laced member of the family. Its such a dream come true to work in front of a live studio audience every Thursday night and the cast and crew are excellent. It should air some time in March on Sunday nights. If you’re hoping to tune in and find Danny Tanner, you wont find him on our show, instead you’ll find a new, edgier Bob Saget to fall in love with all over again.

I have three side notes to add after the interview with Jared.  First, Both Dance of the Dead and Otis are out on DVD.  Rent them both for  Halloween and you’ll have a great time.

Second, I love the fact that Jared will be working with Jere Burns again.  The rapport between them in Otis were some of the best scenes of the movie.

Third, if anyone connected with Dance of the Dead could point me in the right direction to get the Shadows of the Night cover, I will send you a very nice email of appreciation.  The music in the film was great.