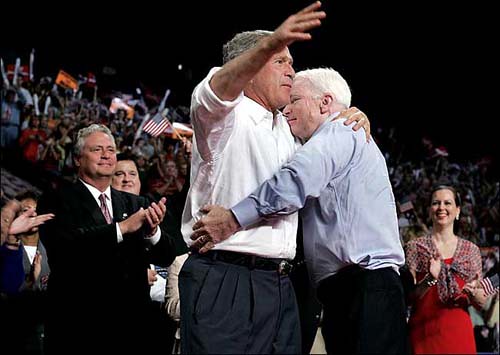 The Huffington Post is reporting on   the results of a recent Gallup Poll survey showing that 67% of all Americans agree with the idea of the president meeting with heads of foreign countries, even if they are considered to be our enemy.   The survey shows that Democrats and Independents are more likely to agree, but even 48% of Republicans believe in the idea of diplomacy.

As the race between Hillary Clinton and Barack Obama dies down, Obama will start to focus more on John McCain.   For John McCain to have a chance at beating Obama, he would need to distance himself from the failed policies of the current administration, and so far he’s not doing that.

He is a candidate who wants to continue a war that 80% of Americans want to end.   He has expressed no real interest in solving the human rights disaster in Gitmo, and his answer for the economy seems to be the same types of ideas that got us here to begin with.   And as for health care reform, there really won’t be any.   On his health care plan, If John McCain were not gainfully employed with a health care package, even he would have a problem finding reasonable coverage at his age. 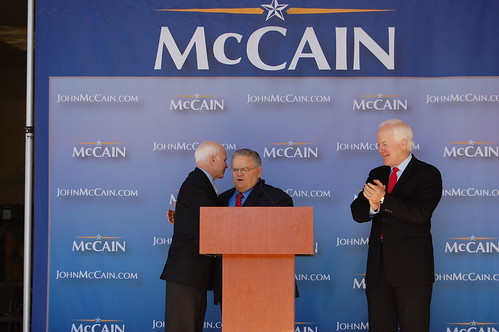 But I think the bigger issue for McCain is the company he keeps.   First we have the whole Rev. Hagee thing.   He seeks out an endorsement from a man who says the Katrina was god’s punishment for planning a gay pride parade in New Orleans and calls Catholicism “the great whore”.   Keep in mind that these were comments made before McCain sought the endorsement.   Then finally drops Hagee when he starts saying that Hitler was a godsend.

Then it comes out that McCain’s economic policy was formed by Senator Phil Gramm, who is now and has been a lobbyist for a mortgage company.   It’s no surprise that McCain’s policy determines that the problem is too much regulation on the mortgage industry.   This coming from a candidate that back in 2000 said lobbyist shouldn’t be allowed in presidential campaigns.

McCain has made a public attempt to purge his campaign of lobbyists, but still has a good amount within his campaign.

As much as the general election should be the headline fight, I don’t see McCain being as difficult to beat as Hillary Clinton.   Americans are losing their homes and paying over $4 a gallon (possibly $5 by the election).   Americans are sick of a war that seems to have no end, or objective.   And I think Hillary Clinton’s defeat shows that most Americans are not happy with the traditional unaccountability in Washington.