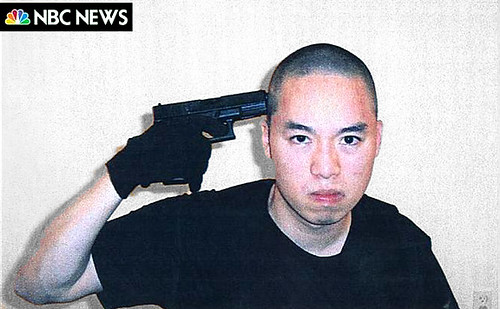 On August 1, 1966, Charles Whitman a student from the University of Texas and a United States Marine, already having killed his own mother and wife, opened a random assassination attack from the top of the 307-foot, Texas Tower, killing fourteen people and injuring dozens of others (The Crime Library, 2007). For almost 41 years, Charles Whitman held the record for campus killings (Thomas, 2007), until April 16, 2007, when a crazed gunman relinquished one of the most deadly attacks on a college campus. With a 9mm semiautomatic and a .22-caliber handgun, Cho Seung-Hui, a student at Virginia Tech University in Blacksburg Virginia, opened fired, killing two students in the West Ambler Johnson Hall and about two hours later in the Norris Hall building killed 30 more students and faculty members before turning the gun on himself (Shapira & Jackman, 2007).

Shortly after the aftermath of Cho Seung-Hui’s rampage, suggestions of Seung-Hui’s behavior, preceding the shootings began to surface and there were message boards containing some disconcerting writings (plays) that Seung-Hui submitted to his professors at Virginia Tech.

Noting some of Seung-Hui’s behavior, some students and people, who knew him, had this to say, He would sit by himself whenever possible, and did not like talking to anyone. I do not think I have ever actually heard his voice before. He was just so quiet and kept to himself. Looking back, he fit the exact stereotype of what one would typically think of as a “school shooter” — a loner, obsessed with violence, and serious personal problems. Some of us in class tried to talk to him to be nice and get him out of his shell, but he refused talking to anyone. It was as if he did not want to be friends with anybody. One friend of mine tried to offer him some Halloween candy that she still had, but he slowly shook his head, refusing it (MacFarlane, 2007). 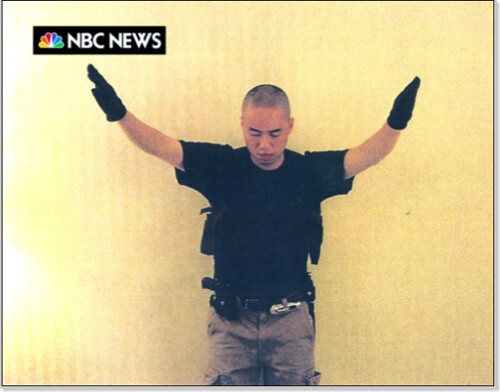 Family members of Cho Seung-Hui were also troubled by his life long silence. Seung-Hui’s Great Aunt claims that his silence brought a great deal of worry to his parents, “When I told his mother that he was a good boy, quiet but well behaved, she said she would rather have him respond to her when talked to than be good and meek […]” (Kleinfield, 2007). Cho Seung-Hui’s mother was often distressed over his dour, depressing manner and his empty face; “she just wanted him to talk” but Cho, who would not talk to his own family would not even talk to any other children in South Korea (Kleinfield, 2007). Even fellow student, Derek O’Dell remembers the bareness about Seung-Hui as he watched the shell casings pop out of the pistol, “Like you can look in people’s eyes and you can see life, their stories; but his – just emptiness” (Thomas, 2007).
Cho Seung-Hui, a 23-year-old senior English major at Virginia Tech, whose behavior was described as troubling, including setting a fire in a dorm, left a suicide note in his dorm room that dissented against rich kids, corruption and dishonest charlatans (Associated Press, 2007). Consequently, in 2005, around the same time as two alleged stalking instances, where Cho Seung-Hui had disturbed one woman enough with phone calls and e-mails, a colleague of Seung-Hui ‘s was concerned that he could be suicidal and Seung-Hui was taken to a mental health facility (Gellar, 2005). Cho Seung-Hui, who was presumed mentally ill by a doctor, in 2005, was also considered an “imminent danger to himself and others,” according to one judges decision (Frisch, 2007). 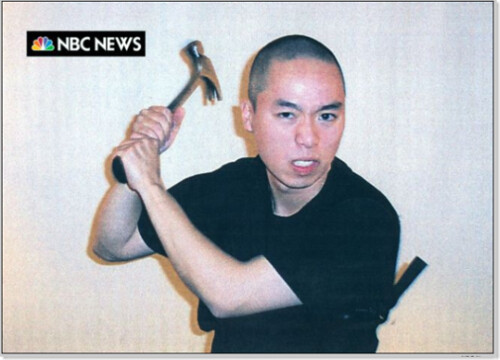 Then in a play written by Cho Seung-Hui, “Richard McBeef,” which left Virginia Tech Professors’ and fellow students’ bewildered, he writes,

{Warning Graphic Content} “What are you, a Catholic priest? I will not be molested by an aging, balding, overweight pedophilic step-dad, named Dick! […] You knew my mom was too good for my father. So you took him out and stole her, you son of a bitch. […] He tried to touch my privates” (MacFarlane, 2007).

Although, this shocking disarray of violence has left Blacksburg Virginia and the nation entrenched with grief; perchance, an indication within the mentality of killer will help resolve some of the unanswered questions surrounding this indisputable travesty. Surfing the evidence that has become known regarding Cho Seung-Hui, the young man behind the Virginia Tech massacre, a few questions that denote further exploration come to mind. Was Seung-Hui expounding on some repressed childhood memories, was he caught up in a cultural ambush, was he overwrought by societal forces, which emphasis the importance of success and achievement or did this quite Korean boy succumb to a deficiency in community associations? 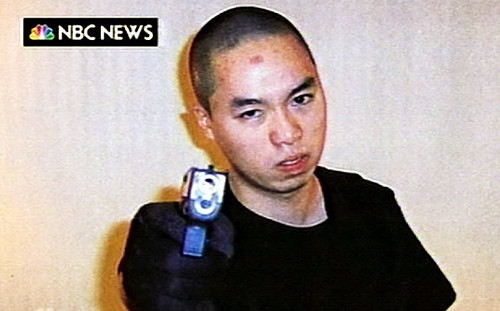 Evan Thomas (2007) explains that Seung-Hui’s parents sought help from the church to assist with his emotional problems but consequently, Cho was bullied in his Christian youth group, particularly by “rich kids.” According to Travis Hirschi, the utter restraint to transgression for a conventional person is the bond of affection; suggesting that the strength in a person’s social and physical environments attach him or her to society and the limit that society places upon acceptable and unacceptable behavior (Winfree & Abadinsky, 2003). Hirschi believed that individuals, who bond with various social institutions, including family and school, are less likely to commit delinquent acts; also suggesting that social bonds reduce the natural human susceptibility for criminal behavior (Winfree & Abadinsky, 2003). Hirschi’s social bond theory is derivative of four elements; attachment; commitment; involvement and belief; consequently, when one of the four elements of the social bond becomes weak or broken, delinquent or criminal acts will begin to manifest (Winfree & Abadinsky, 2003).

Walter Reckless’ containment theory, which also related to Hirschi’s social bond theory, proposes that the strength of biological and sociological conditioning will propel and encourage individuals towards transgression; however, outer containments, such as family and support groups and inner containments, such as responsibility and the sense of right and wrong will deter criminal activity (Winfree & Abadinsky, 2003). In addition, Gottfredson and Hirschi suggested that those with certain characteristics, especially those who have pitiable emotional attachments to their families are likely to employ criminal behavior (Winfree & Abadinsky, 2003). 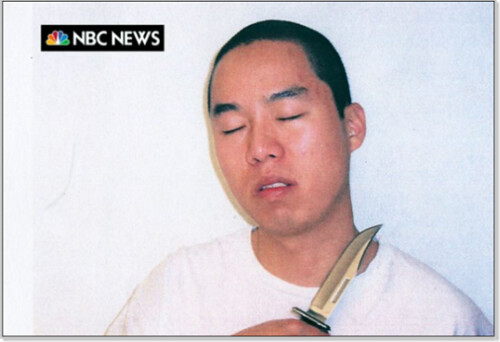 Even though it is difficult to say, when, where and how Cho Seung-Hui became distanced toward his family, his lack of connection even as a child clearly suggests that something somewhere was beginning to manifest in his mind and the outside social forces, such as being ridiculed by higher societal classes is like assimilating a lethal concoction . While, the theories lack an ample connection that would explain all crime(s) and the challenge to test the degree of difference in the susceptibility have been assorted (Winfree & Abadinsky, 2003); in hindsight, the theories are feasible on the surface. For instance, the theories are capable of expounding on the possibilities of Seung-Hui’s rampage; thus giving further implication to the counter action or inactions of those around him. 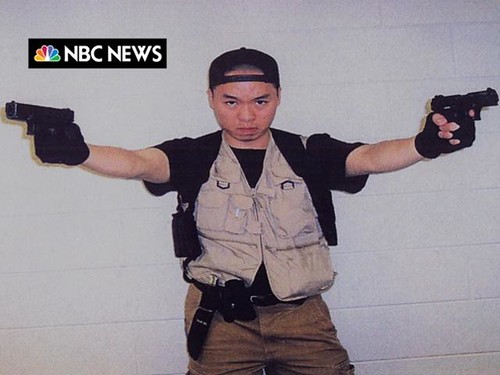 Merton saw unrestrained ambition or the uncontrolled yearning for success as the primary origin of transgression in the United States and disputed that no other culture comes in close proximity when considering financial security as a boundless implication (Winfree & Abadinsky, 2003). However, was this unrestrained ambition to achieve economic success in America the cause of Seung-Hui’s actions or could the profound emphasis situated on Korean immigrants have played a role? Perhaps, both entities could have contributed a considerable part in the wake of the Virginia Tech massacre. According to Thomas, it is difficult to overstress the emphasis that Korean immigrants rest on the acceptance to prominent American universities; any covert harm done was profoundly aggravated by the thoughts of isolation and degradation that a Korean boy can undergo trapped in the frantic pursuit for academic achievement (2007). During the second expansion of the social strain theory, Robert Agnew suggested that the disappointment to attain projected goals causes a strain that escorts some individuals towards anger, resentment and rage; further implying social discrimination and/or disparity as an underlying cause (Winfree & Abadinsky, 2003).

Perhaps, Cho Seung-Hui was an outcast to his family for failing to obtain a suitable place in an “Ivy League College” and again ridiculed by his peers for failing to meet the standards of high-society. Nonetheless, nothing was as disturbing as the play(s) that were written by Seung-Hui, “Richard McBeef,” which denoted a tale about a father figure coupled with sexual abuse. According to Thomas, Cho Seung-Hui was not quite Korean like his parents; “Somehow, somewhere, someone planted an evil seed in Cho – if not the Devil himself, then conceivably some stranger or relative” (2007). If the statement about Seung-Hui not being Korean like his parents is true then there may be some truth behind the writing in his play, “Richard McBeef.” Could Cho Seung-Hui have recalled some repressed memories from his early childhood? Did Seung-Hui succumb to a life of silence due to some traumatic event in South Korea?

Psychoanalytical theory ascertains the early development of children further suggesting that dysfunctional adults, including those whose irrational behavior is unlawful, are the summation of their untimely experiences during childhood and possibly infancy (Winfree & Abadinsky, 2003).   Psychoanalytical theory proclaims that an environment, which fails to cultivate or perhaps that is exemplified by disregard and ill-treatment will spawn an adult whose behavior is prone to clash with communal standards (Winfree & Abadinsky, 2003). Although, the correlation among criminality and child cruelty is vague, Cathy Widom suggested a sub-culture of violence perspective to the assessment of child cruelty; thus, proposing the cycle of violence (Winfree & Abadinsky, 2003). However, could Robert Linder project a suitable explanation for Seung-Hui’s behavior? Linder, whose well-known psychoanalytical work, “Rebel Without a Cause,” which engaged a rather rigorous Freudian philosophy claimed to have produced a virtually astounding cure of blind prison inmate, suggesting that his criminal career was due to anxiety, fear and guilt, which resulted from watching his parents have sex when he was 8 months old (Winfree & Abadinsky, 2003).

Could Cho Seung-Hui’s indisputable behavior have been the result of childhood violence or did he witness something that would mark his silence or years to come? On the other hand, perhaps, there were more sinister secrets lurking in the background? What would prompt a 23 year old to ascertain such horrific writings about sexual abuse?   Perhaps, Freud’s implication of repression may yield some clues as to what went wrong with Cho Seung-Hui. Unfortunately; however, we can only speculate what went wrong on April 16, 2007 and we may never know what drove Cho Seung-Hui to commit, such a heinous act against humanity. Perhaps, time will yield the answer.

[Author: Rebecca Linhart, Title of Paper © 2008] Do Not Copy Disclaimer