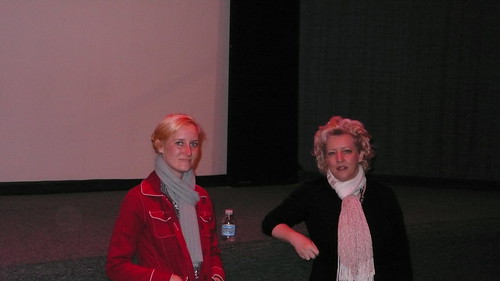 The movie Fair Trade was playing along with 7,500 Miles to Redemption at the Ashland Film Festival and is the third documentary I saw at the festival.   The Fair Trade movie is directed by Lauralee Farrer and follows the life of Tamara Johnston, a young women with a promising future who suffers the loss of her long time friend and boyfriend to a auto accident.

Feeling the pressure of the stress, and facing the reality of a life without the person she loved, Tamara falls into a deep depression that results in a pact with god. “I’ll give you 5 years, and if you show me a life worth living I’ll go on.”   Tamara decides to make some changes in her life and quits her job with Dreamworks to go into business with her twin sister and brother in law.   Their business, Anti-Bodies will not be focused solely on profits, but rather on the concept of Fair Trade.

For those who are not familiar with the concept of Fair Trade, here is a brief description from Wikipedia:

“Fair trade is an organized social movement and market-based approach to alleviating global poverty and promoting sustainability. The movement advocates the payment of a fair price as well as social and environmental standards in areas related to the production of a wide variety of goods. It focuses in particular on exports from developing countries to developed countries, most notably handicrafts, coffee, cocoa, sugar, tea, bananas, honey, cotton, wine, fresh fruit, and so on.

Fair trade’s strategic intent is to deliberately work with marginalized producers and workers in order to help them move from a position of vulnerability to security and economic self-sufficiency. It also aims at empowering them to become stakeholders in their own organizations and actively play a wider role in the global arena to achieve greater equity in international trade.”

In short, Fair Trade does business direct with co-ops in foreign countries and pays a living wage.   Obviously this means products cost more.   According to Tamara’s brother in law in the movie the company pays 600% more for their main ingredient than most companies.

Tamara and her partners decide to make soap, thinking this would be an easy product to manufacture.Ã‚   Part of the humor of the story is that soap ends up being quite difficult to properly make.

As the story unfolds we see Tamara find a cause she can wake up in the mornings to support.   We see Tamara visit the co-op first hand and meet the people in Africa she is helping by offering them a living wage, as opposed to taking advantage of the pricing she could receive.   As she starts to realize the impact she is having on the world, she starts to value her own life more.

In the end this is a simple story of someone finding their purpose in life.   We get the chance to see in a very big way that feeling we all have; a life without a greater purpose isn’t really very fulfilling.   In Tamara’s case she was striped of something that provided her that fulfillment, so she must go out and find it elsewhere.

I enjoyed the movie, but I admit my interest was more on a business side, and I wished I could have learned more about their business in the film.   The idea of Fair Trade interests me.

I would give the film a 2.75 out of 5.   It’s worth checking out if you’re interested in this type of documentary.   But one thing that is a no brainer is trying to purchase Fair Trade items.   It’s a little more expensive, but it’s the right thing to do.   Here is a link to Tamara’s business which sells Fair Trade Soap.