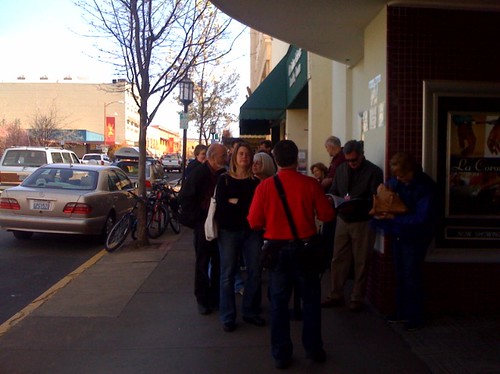 This is the first year I was in town for the Ashland Film Festival, and I’m happy I finally got to attend.   I just got back from SXSW a couple weeks ago, so I was missing film festival life.

But there is a big difference between Austin and Ashland.   How both are liberal towns, Ashland suffers from the poor organizational skills and the internal bickering that is well known in extreme liberals.   Therefore things always seem to be done half-assed here.

The film festival is not any different.   How we had some great films, and I respect the people in charge for putting in the effort, it’s just total chaos.   And by chaos I don’t mean the type that comes from the unexpected, I mean they just don’t care a lot about the details.

For example, every time I see a movie at the Varsity theatre it’s as though they have never before used a projector.   The picture is off the screen, the sound is off, etc…   The first movie I attended this year, August Evening, contained sub-titles.   But for the first part of the movie they were off the screen so no one could understand the movie, unless of course they spoke fluent Spanish.

This type of problem persisted through the last film I saw, The Sensation of Sight.   The bottom quarter of the shot was cut off in the opening scene.   So the audience didn’t understand that there was a body laying on the lawn.   These are important details to help you understand a film.

When I went to see The Last Queen of the Earth, I couldn’t stay because it’s an especially quiet film, and the loud noise from the next theatre was too distracting.

It would be nice that since these are high quality films, the team at the Varsity would make sure the camera is all set up to show them properly.   They worry so much about the experience that they ask us to turn our phones off, not just vibrate, but they don’t make sure that you can hear the movie, or that the movie is on the screen properly.

There is also the total lack of organization, but that can be excused because of the unusually high volume of people attending.

I offer this criticism not out of disrespect for the festival, but in the hopes that we can see it grow into something really great.   I would love to see something that continues to attract some great film makers.   And I think it could be great for the town of Ashland.

To their benefit, some of the staff really go out of their way to make sure people are happy in line.   And there is still a small town feel to the event, which is nice.   I’m pretty sure I’m the biggest ass there.

Best Films of the Ashland Film Festival
I was very happy to see that August Evening won the Best Feature honor.   That was absolutely my choice as well.   August Evening is the best film I have seen since seeing The Visitor at SXSW. It’s perfect.

Of the other films I saw, I’m going to give runner up status to Eden.   Eden was a nice surprise and one of the movies I find my mind going back to.   If I was going to chose a third place winner, I would have to say Outsourced.   It’s the best romantic comedy I have seen in a very long time.

So if you get the chance, check these films out.   Outsourced is available on DVD on their website right now.
[tags]ashland film festival, august evening, eden, outsourced[/tags]