Four years ago my friend Russ, who at the time worked for me, asked if the company could send him to SXSW.   After looking over the website I thought it seemed like a good show to attend myself.  I was growing tired of the industry shows like Ad:tech and Search Engine Strategies.  Plus, I had never been to Austin before.  It was a great decision to make.

I have gone to SXSW with Russ every year since.   And each year I am more amazed at how great the town and the festival is.   What separates SXSW from most of the events I was going to is that it’s not primarily an interactive conference, that’s just a part of the whole experience.   SXSW is a great film and music festival where some of the best talent come to show off. 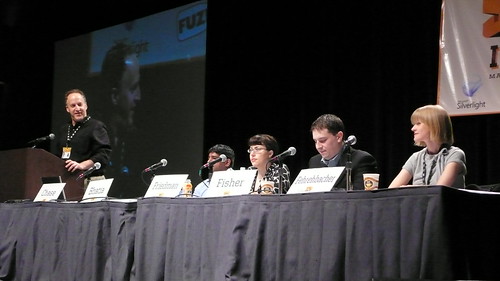 I have had the honor of speaking at SXSW a couple years now, and I truly love it.   It’s really the only show I get excited about.   And this year I made sure to stay over a week so that I could experience the music and film festival more first hand.

I stayed at the Hilton this time, which was a pretty good idea.   The hotel is nice, but the real benefit is that it’s right across the street from the convention center, which saved Russ and I a little stress in those rushed mornings. 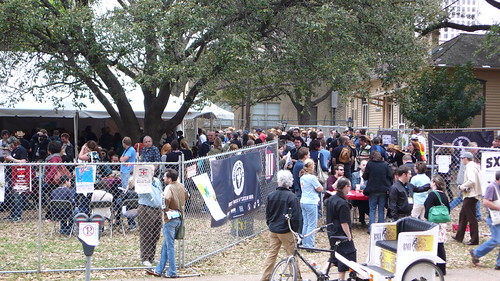 The Austin downtown Hilton offers nice rooms and the staff if very friendly.   The only complaint I had was that some of the lights, and the TV were unplugged for some reason, so we had to play with those to get them to work.   And the toilet handle needed to be held down to get a full flush.   Other than that, the hotel was quite comfortable.   One other note about the Hilton is that the grilled cheese in the bar is really amazing.   If you need a late night snack, it’s the perfect meal.

I already did a separate post about the movies I saw early on, 21, Harold and Kumar, The Visitor and Registered Sex Offender, and I’ll do another post about the others I seen.   I will say that the best three movies I saw there were The Visitor, Dance of the Dead and Otis.   All three movies really beat anything I expected.   The only two disappointments were Choke and Nights and Weekends. 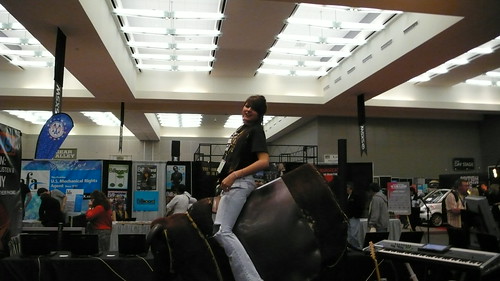 One note about the movie theaters in Austin; they are awesome.   I saw most of the films at The Alamo Ritz and Alamo Lamar.   I admit to loving the big multiplex movie theatre, complete with IMAX (not that there is anything like that here in Ashland) with the new Christy digital projectors and THX sound, but I really love the way Alamo has set up their theatre. First off, they serve real food.   Hamburgers, pizza, nachos, steak, chicken wings, etc…   And they have kick ass shakes (they add mini-M&M’s and have a huge straw).   Plus they play cool pre-film entertainment that is actually entertaining not a commercial.   Old 60’s and 70’s commercials, old PSA’s from the 50’s, Hee Haw reruns, etc…  And the staff is just as cool as the rest of the people in town. 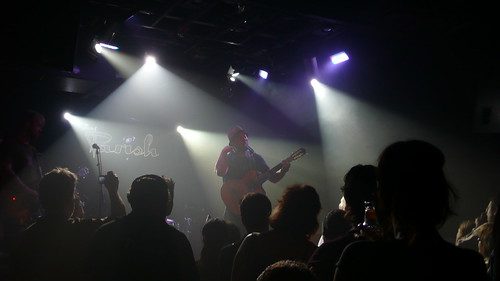 I also got to listen to some great music.  My first music spot was a return to the Saxon Pub to see Bob Schneider and Matt the Electrician.   They are both amazing and make for a great show.   I got to hang out with Bob a little after the show, which is always cool.  BTW, Bob is in Registered Sex Offender and does an awesome job.

The second show I went to was the Hotel Cafe Tour at Parish on 6th Street.  I’ll do an entire post about the show this week, but I’ll just say now it was really great.   11 different artists in 1 show that started at 7PM and went on clear to 2AM.  It was a long show, but I got to see 11 great artists in one night, so well worth it. 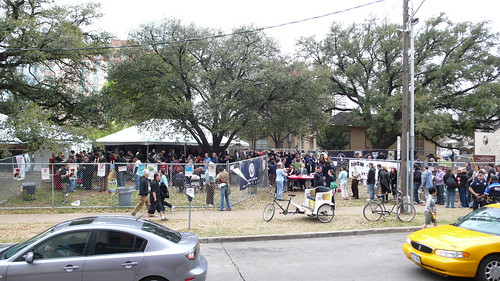 One of the best part of the show is that I get to meet some really interesting people.   This trip was no exception.   I met Andrew and Nii, both people who I really enjoyed a nice lunch with and hope to see again soon.  I also got to meet a friend in person finally, Justin is a personal injury lawyer in Austin.   He took me to a great place for lunch, although I can’t remember the name.

I’m going to do a follow up post about the movies and Hotel Cafe Tour, but I wanted to get something up about the show soon.   SXSW is truly the most fun I have all year long.  If you haven’t gone, you should really check it out.