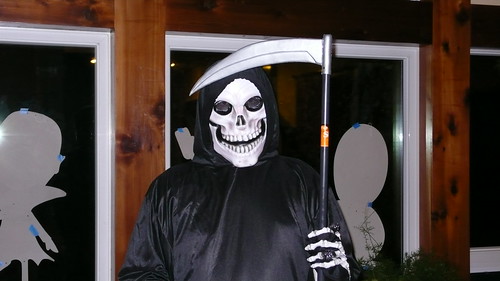 We had a fairly uneventful Halloween this year. Since Michael is not 13, this may be the last year he gets out to trick or treat. The fact that he is already tipping 6′ makes him look a bit odd going to door-to-door. It kinda sucks that Ashland is not exactly the trick-or-treat capitol of the world. They have a big parade and party downtown, but not many active houses on our block giving away candy.

We are of course the exception. We were giving away the full size candy bars, but we are so tucked away that most people don’t even know there is a house here. We got one mid-size group of kids. I should have just unloaded the candy to them, but now I have it sitting around the house.

To be honest this was one of those days I really miss California. I would have liked to of taken Michael to Knott’s Scary Farm. I always loved that when I was a kid. Maybe we should do something out of town next year. It’s hard because he has school usually on Halloween. 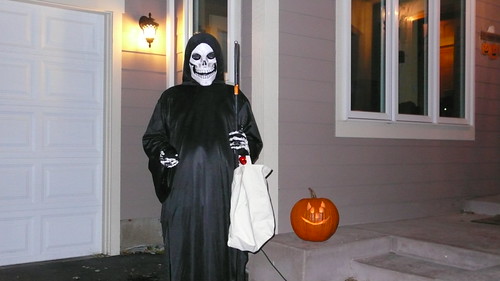 We watched the Omen remake which really sucked. The whole movie just felt a bit flat. I’m sure it’s partly due to the fact that it followed the first movie so closely that there was no surprise as to what was going to happen next. But the acting was a bit uninspired as well.

That’s about it for the uneventful Halloween. I did take a couple shots of Michael with my new camera. I’m not sure how I’m liking it yet. I’ll have to give it a good run through in Vegas and Hong Kong next month.