It’s Friday night and I’m not out at a club, or a movie, or even the Olive Garden.   No, I’m at home watching the biggest geek show on the planet, Battlestar Galactica.   This is even worse than my fight against WoW addiction.   Well…maybe not that bad, but it’s not good either.   I have to admit that I love this show.

I’m not declaring it’s as good as Dexter or even 24, but it’s pretty damn good.   All geek issues aside, the writing (not necessarily the dialogue) is good, the acting is better than most shows on TV, and the special effects are well above average.   But it’s the story line that really draws me in.

The first Battlestar Galactica, or BSG as the dateless refer to it, was pretty one dimensional.   You had the good guys, including the good looking guy from the A-Team, and the dad from Bonanza, and you had the bad guys, primarily evil robots wit red strobing eyes.   And there was never any talk of who was right and who was wrong.   Obviously the people were in the right because they were attacked, and of course because they are human.

But in the new BSG our good guys, including the boss from Miami Vice and a hot blonde girl, are fighting more human looking characters with actual emotions.   Thus we start to see some complexity.

This new Sci-fi series, which is on it’s final season, has hit upon some issues that you normally don’t see in the genre.   Issues like religion, communism, politics and cyborg menage a trois are just some of the more complex issues I have seen in the show.   Tonight for example showed the advanced Cylons being attacked by the more primitive Cylons because the advanced Cylons wanted to keep them as working tool instead of letting them evolve.   The irony of course is that this is essential what they feel was the crimes human put upon them.   Humans created machines to work for them, and didn’t like when machines evolved into something that felt they deserved a choice. 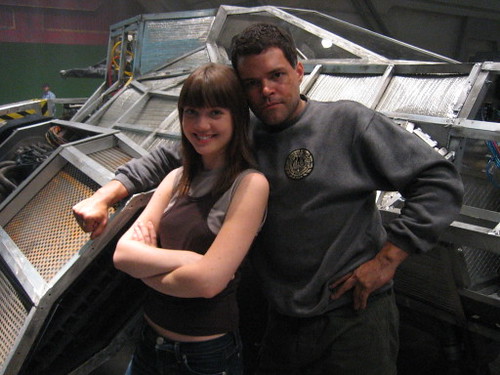 Then of course there are the hot women of the show, which have blessed the covers of Many issues of Maxim.   My personal favorite, Nicki Clyne (Cally Tyrol) is not seen in every episode, (nor has Clyne been on the cover of Maxim, which I think is a crime) but appears to play a big role in next week.   The eye candy obviously helps us lonely BSG watchers bare through our Friday nights.   I just look at it as having a date with Nicki Clyne every Friday.   She’s a lucky girl!