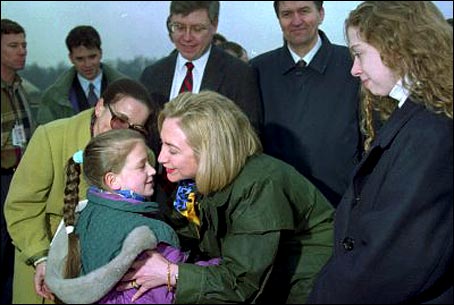 This week we have seen Hillary Clinton admit to Ã¢â‚¬Å“misspeakingÃ¢â‚¬  about the danger she and her daughter faced during their 1996 visit to Bosnia.Ã‚   From the looks of the political blogs and forums I visit it appears that people are considering this more of a lie than Ã¢â‚¬Å“misspeakingÃ¢â‚¬ . For those who havenÃ¢â‚¬â„¢t heard, Senator Clinton claimed to go to Bosnia when it was so unsafe even the President couldnÃ¢â‚¬â„¢t go.Ã‚   But in fact the President had already been there weeks earlier.Ã‚
She went on to say that aircraft had to land using defensive measures, an account disputed by others on this trip.Ã‚   And that she and Chelsea were not given a reception ceremony, but instead rushed from the plane to an army base with their heads low to avoid sniper fire.

This of course is all untrue.Ã‚   Check out this CBS video for more details.

There have be more substitutive lies about Senator Clintons claims to foreign policy experience, but what makes this one worse for her is the fact that itÃ¢â‚¬â„¢s so clearly contradicted on video.Ã‚   The statement that she Ã¢â‚¬Å“misspokeÃ¢â‚¬  about her Bosnian adventure is coupled with a whole new set of lies.Ã‚   During an interview with a Pittsburgh radio station the Senator had this to say.

Ã¢â‚¬Å“You know I have written about this and described it in many different settings and I did misspeak the other day. This has been a very long campaign. Occasionally, I am a human being like everybody else. The military took great care of us. They were worried about taking a first lady to a war zone and took some extra precautions and worried about all sorts of things. I have written about it in my book and talked about it on many other occasions and last week, you know, for the first time in 12 or so years, I misspoke.Ã¢â‚¬ 

But here are a couple other times she has Ã¢â‚¬Å“misspokeÃ¢â‚¬ :

I remember landing under sniper fire. There was supposed to be some kind of a greeting ceremony at the airport, but instead we just ran with our heads down to get into the vehicles to get to our base.

I remember a trip to Bosnia where the welcoming ceremony had to be moved inside because of sniper fire.

Obviously she enjoys exaggerating her Bosnian story, but here are some more substantive issues where Senator Clinton is Ã¢â‚¬Å“misspeakingÃ¢â‚¬ .

Senator Clinton has repeatedly denied her support for NAFTA, stating Ã¢â‚¬Å“I have been a critic of NAFTA from the very beginning.Ã¢â‚¬ .Ã‚   But again it looks like this may be Ã¢â‚¬Å“misspokenÃ¢â‚¬ .

Senator Clinton did in fact heavily support NAFTA during President ClintonÃ¢â‚¬â„¢s administration.Ã‚   She even appeared at a November 10, 1993 event to inform business leaders how to lobby congress for NAFTA.Ã‚   Senator Clinton also touted NAFTAÃ‚   in her book as a success of her husbands administration.

Senator ClintonÃ¢â‚¬â„¢s campaign people have tried to downplay this effort, but the director of the United States Association of Importers of Textiles and Apparel, Laura Jones calls this Ã¢â‚¬Å“ludicrousÃ¢â‚¬ .Ã‚   “There was no question that everyone who spoke including the First Lady was for NAFTA, it was a rally on behalf of NAFTA to help it get passed,” says Jones. “It’s unquestionable.”

Well it turns out that story the ClintonÃ¢â‚¬â„¢s pushed out was only half true. There was a conversation between the Canadian government and a Democratic Senator running for President.Ã‚   And the idea was not to worry because its all just posturing.Ã‚   But in fact it was the Clinton campaign having this conversation, not Obama.Ã‚   Check out the MSNBC video for more details.

Another one of the successes Hillary Clinton touts is her role in SCHIP, the State ChildrenÃ¢â‚¬â„¢s Health Insurance Plan.Ã‚   This is what she references when she says she provided health coverage to millions of uninsured children.Ã‚   Well it seems that the Boston Globe feels that once again Senator Clinton may have Ã¢â‚¬Å“misspokeÃ¢â‚¬ .

It seems that while Senator Edwards and Senator Hatch were hard at work trying to insure children in this country, the Clinton administration was busy shooting down the plan.Ã‚   And several of the lawmakers report that Senator Clinton had Ã¢â‚¬Å“no role in helping write the legislationÃ¢â‚¬ .Ã‚   So if you wanted to vote for the Senator who fought to insure millions of children, that ship has sailed with John Edwards.

I should note here that no one disputes Senator Barack ObamaÃ¢â‚¬â„¢s claim that he sponsored legislation that provided insurance to over 70,000 children in the state of Illinois.

Senator Clinton has made repeated mention to the fact she played an Ã¢â‚¬Å“instrumentalÃ¢â‚¬  role in bringing peace to Northern Ireland.Ã‚   But this is what someone who was instrumental in the process had to say about that claim: “The road to peace was carefully documented, and she wasnÃ¢â‚¬â„¢t on it.Ã¢â‚¬ .

But according to Terry McAuliffe, her campaign chairman, Ã¢â‚¬Å“We would not have peace today had it not for Hillary’s hard work in Northern Ireland,Ã¢â‚¬ .Ã‚   This was said on March 4, 2008 on CNN.

Does anyone remember Hillary Clinton playing such a major role in this process?Ã‚   And if so, why was it not mentioned in her book?

I guess itÃ¢â‚¬â„¢s easy to support Senator Clinton if you chose to believe what she says.Ã‚   After all according to her version of events she is a cross between Jack Ryan and Mother Theresa who is being treated like Joan of Arc by the press.

I have a suggestion for Hillary Clinton, and her obnoxious communications director Howard Wolfson.Ã‚   If you donÃ¢â‚¬â„¢t want the press to come after you, stop lying.Ã‚   Or at least learn to lie better and be more likable like your husband.

And for anyone supporting Hillary, think about the fact that she lies to you constantly.Ã‚   She is destroying the chance of a Democrat winning the general election.Ã‚   And now she is just making the decision to say whatever she can to collect votes.Ã‚   There is a reason that Obama voters poll better educated.Ã‚   He gets the informed vote.Ã‚   If you donÃ¢â‚¬â„¢t want to take the time to be informed, just vote with us.