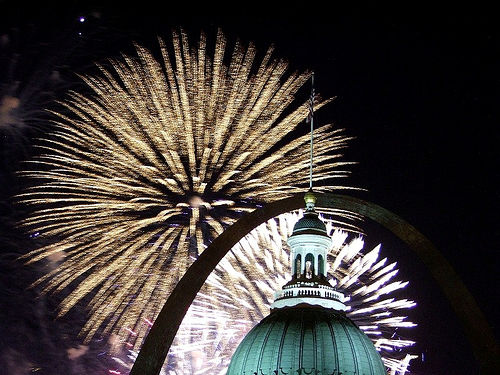 We celebrated an early 4th of July yesterday, although I’m sure there will be at least a few fireworks tonight. If this year is like the last, most of the day will be filled with protesters and demonstrations, so we’ll just stay at home.

President McCain is scheduled to make a speech this evening, which will predictably be centered around the Mid-East War. Somehow, we still don’t have enough manpower to cover Iraq, Afghanistan, and Iran, even with the draft in place. On the up side, the administration claims to have driven most of al Qaeda out of these countries, forcing them to operate only in small cells or from their semi-official base in Pakistan, where it’s believed Osama bin Laden is still living.

But it’s still shaping up to be a tough reelection for the President. With unemployment now nearing 15%, the administration still insists we are not entering a depression, but people are angry and demonstrations are being called riots with more frequency. Many are also questioning McCain’s increasing number of “senior moments” as the media describes them. I can’t help but wonder if this means Vice President Rice will be running instead, or maybe just taking over presidential duties when McCain gets reelected.

The Democrats, though, have yet to produce a solid contender. Although Senator Obama says he is still weighing his options, he seems hesitant to run. It’s hard to blame him. After Senator Clinton had the super-delegates overturn his win, many people lost faith in the Democrats, which is probably why Clinton fell short of a November win by such a large margin, and why many congressional and senatorial seats were lost to Republicans the following year. There is some talk Obama will run under the new party formed around Al Gore, but that’s all just speculation.

Our neighbors accepted our invitation to dinner tonight, which was a surprise. They’ve been very private since they lost their daughter in Iran. She would have been 20 years old this August. I understand their sadness. But with recruitment at an all time low, and our urgent need to invade Iran in order to bring stability to the region and protect ourselves from the threat of nuclear attack, what choice did the President have but to enact the draft?

Seeing their pain has reinforced my decision to emigrate. We should be all set by the end of the month. Australia will be good for Michael, and spending his last year in high school there will help streamline some residency requirements. I’m just lucky that I can do my job from anywhere. When we first mentioned the move to Michael, he was very upset about missing his senior year here. But since then, many of his friends have gone. Some were drafted, and many other families had to move to Medford or other areas to look for work after they lost their homes. Ashland is expensive, and it’s hard to legitimize the drive to cheaper Medford with gas at $5.60 a gallon.

It would’ve been nice if McCain hadn’t canceled out automaker fuel consumption standards along with the other restrictions on industry he lifted. He says he remembers that before Pearl Harbor thing were different, and that during WWII removing regulations from private enterprise was what moved us forward as a superpower. I’m not sure how I feel about his logic, but I have to admit that I feel bad about making so much money with my Haliburton, Exxon, and Blackwater investments. But it just seemed like such a safe bet after the election.

Of course, my Blackwater stock took a hit last April when the families of the Berkeley students filed their class action suit for wrongful death. But when President McCain exempted Blackwater from civil suits so they could “effectively police our country in the absence of the National Guard” the stock price shot to new highs. I’m hoping all the merger talk with Haliburton is true, because that should give me enough money to pay cash for our new home, even with the exchange rate so low.

I admit IÃ¢â‚¬â„¢m nervous about the move as well. The area we’re going to has a lot of expatriates since this is the first time since the 20’s that more people are leaving America than are arriving, but I don’t really know any of them personally. It’s hard to correspond internationally these days with the way the NSA filters email.

I’m hopeful that we’ll come back someday. Regardless of what the world thinks, America is still a great country — if not due to its government, then definitely due to its people. But I must sign off for now and go finish some packing. Please leave a comment below about how this 4th of July is going to be for you.

Check out my page about Robert Johnston, an attorney in Bowling Green