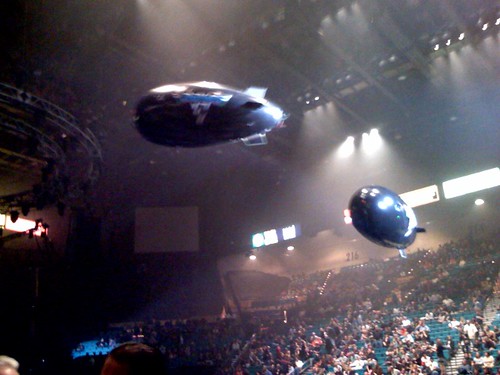 Most who know me know that Las Vegas is my favorite travel destination.Ã‚   So what better place to bring in the new year?

I have been trying different hotels as much as possible.Ã‚   This time I stayed at Mandalay Bay.Ã‚   The price wasnÃ¢â‚¬â„¢t bad considering how expensive Vegas gets on New Years.Ã‚   After checking Vegas.com, I found that Mandalay Bay was actually the cheapest 5-star hotel on the strip.Ã‚

The room was nice, although I think we have really loosened the concept of a Ã¢â‚¬Å“suiteÃ¢â‚¬ .Ã‚   The view was so-so.Ã‚   Room service was a bit slow, but the overall hotel is nice.Ã‚   The big selling point for me was that the New YearÃ¢â‚¬â„¢s Eve concert I was going to was in the hotel at the House of Blues.

I got in on the 29th and spent the day alone hanging out at my usual favorites like The Big Apple Bar.

On the 30th we went to Red 8 at the Wynn for lunch, and then on to Van Halen at the MGM Grand.Ã‚   Van Halen of course kicked ass.Ã‚   I had never seen the original line up with David Lee Roth, so it was nice to finally do that.Ã‚   We had great floor seats, so we got pretty close to the action, and of course a little more deaf.

The Van Halen tour is including Wolfgang Van Halen, who did a great job.Ã‚   A horrible realization hit me see him on stage though.Ã‚   The last time I saw Van Halen, he hadnÃ¢â‚¬â„¢t been born yet!Ã‚   IÃ¢â‚¬â„¢m so old.Ã‚   After Van Halen we stopped by the New York. New York on the way back to Mandalay and grabbed a slice while listening to the dueling pianos at the Time Square Bar.Ã‚   We then stopped in The Big Apple for 20 minutes to listen to some more music.

For New Years we had dinner at Red Square, which was better than I thought it was going to be.Ã‚   We had caviar, champagne, bisque, filet mignon, and strawberries for dessert.Ã‚  Ã‚   We had VIP tickets to the House of Blues for the Goo Goo Dolls, which was also really great.Ã‚   We again had great seats up in the VIP section on a nice big velvet couch.Ã‚   Although we did have to get a little aggressive in defending it from people who felt they deserved to sit with me.Ã‚   One especially non-cool chick moved my drink from the end table to sit her big ass down.Ã‚   I let it slide, but still…very rude.Ã‚   The show went on to almost 1AM, so we just grabbed an 1:30 breakfast and headed to bed.

The next day we headed slept in and then headed over to the Wynn for a buffet lunch, which is not a bargain by the way at almost $50 per person.Ã‚   After that we headed over to see a movie, Juno (which is really great) and then watched some movies in the room until we fell asleep.

For our last night we just grabbed some dinner at Nine Fine Irishmen and headed out to a club.Ã‚   We headed back to the hotel at around 3AM, packed while we eat room service and went to bed.

I now feel appropriately tired while I write this as the airport.Ã‚   The trip was definitely at good way to end an active year.