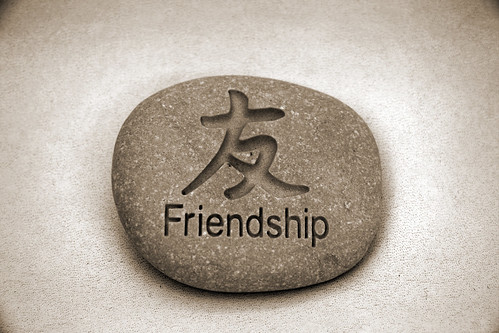 I have been going through some sort ofÃ‚   early (hopefully) mid-life crisis.Ã‚   I have felt restless with my work, started becoming way more politically active, started concerning myself with the world and had bouts of unintentional self reflection.Ã‚   I have been questioning many things about the way I live my life; how I became the person I am, and how much I like the person I have become.Ã‚   ItÃ¢â‚¬â„¢s been a real mess inside my head the past few months.

I had some time to reflect on these things while at SXSW this month.Ã‚   I have been taking a little break from the interactive marketing world, but I did attend some sessions that included people from my industry.Ã‚   IÃ¢â‚¬â„¢m not sure how to say this without sounding like I think IÃ¢â‚¬â„¢m somehow superior, but I really hope I never sounded like the people on those panels.Ã‚   Most of them were just so slimy that I felt a little ill just having been subjected to their drivel.Ã‚   After 20 minutes of hearing some ass-clown from one of the big interactive agencies talk about cross-pollinating with Gen Y (something I thought Chris Hansen from Dateline has been trying to stop), I couldnÃ¢â‚¬â„¢t take any more.

This prompted me to make some changes in my life, the first of which I will share here now.Ã‚   I will stop networking and start making friends.Ã‚   I am going to provide myself the luxury of only dealing with people I genuinely like.

To clarify what this means to me, let me say that I have been networking for the better part of a decade now.Ã‚   I made sure to ingratiate myself with people who I think can benefit me down the road.Ã‚   IÃ¢â‚¬â„¢m not saying I shun people with no foreseeableÃ‚   upside, but I didnÃ¢â‚¬â„¢t seek out true friendship.Ã‚   ThatÃ¢â‚¬â„¢s changing now.

A good example of this is during this last trip to Austin, I went with my friend Russ.Ã‚   I have gone to SXSW with Russ every year for 4 years running now.Ã‚   As a matter of fact, he is the person that introduced me to the event.Ã‚   The difference is that Russ had worked for me for the past several years, but this year he really doesnÃ¢â‚¬â„¢t work for me anymore.Ã‚   This year I invited him with me as my friend.Ã‚   I had a spare ticket and a hotel room with an extra bed, so I invited someone whose company I enjoy (although Russ snores loud enough to wake the dead).Ã‚   I have to say that I felt more comfortable this trip than any previous.

Another example is while in Austin I met a few new friends.Ã‚   One in particular, Andrew, works for a development firm.Ã‚   We had a great talk about a project we could work on together.Ã‚   But I can honestly say that I like this person.Ã‚   We shared the same taste in music, we had a lot of the same feelings on technology.Ã‚   We even shared the same social issues with not being big drinkers.Ã‚   I really enjoyed talking to this person.Ã‚   We are working on a project together, and IÃ¢â‚¬â„¢m hoping all goes smoothly.Ã‚   But IÃ¢â‚¬â„¢m very set on putting the relationship above the project, which IÃ¢â‚¬â„¢m certain is the key to being a friendship.

I also met a really interesting guy named Nii.Ã‚   Nii is originally from Ghana, which is interesting enough for me to be hearing from this person.Ã‚   But we also have a great talk about politics, travel, life in Africa.Ã‚   I feel bad for not talking more business with him, but I was looking for friends not business contacts.Ã‚   Nii (and Andrew) are likely to become both.Ã‚   I may go speak at a conference in Nairobi with Nii, which would be awesome on many levels.