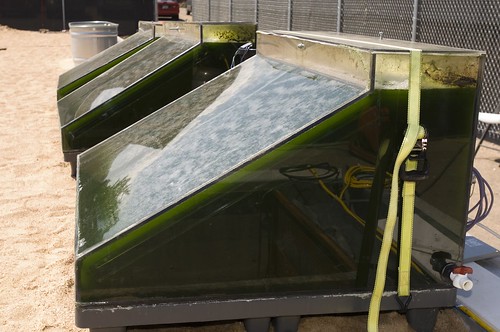 The world is embracing the challenge of reducing greenhouse gases as evident by the Kyoto Agreement. Biofuels are substitutes for fossil-fuels that are developed from renewable green plants. However, when governmental monies are in play, some programs get funded that otherwise would not or should not. (guest post by Elizabeth Rathgeber)

Ethanol is a great example of a biofuel “solution” that may be creating more harm than good. Ethanol, produced naturally from fermentation by yeasts and other microorganisms, is subsidized heavily by the federal government. Currently in the United States, corn grain is the main feedstock for ethanol production. American taxpayers are billed heavily to subsidize the country’s privately owned ethanol plants. When a large amount of ethanol is produced from corn this creates problems.

Corn is a primary source of livestock feed, and feedlot owners have seen their costs rise dramatically because of ethanol production and these costs are passed on to consumers. Also, these crops are not sustainable. They are grown on fertile land and when crops are harvested, the nutrients are removed and not replaced through the natural process of recycling dead plants back into the land to provide nutrients for the next cycle. Water is a precious resource and Ethanol production uses large amounts of it. This could increase the water shortage worldwide, which is already occurring in some arid countries, including a drought in the southeast United States. Another problem is that farm machinery and vehicles burn fossil fuels to harvest and transport the crops. This process contributes considerable amounts of carbon dioxide to the atmosphere.

According to a 2005 Cornell University and UC Berkeley study, they found that turning plants such as corn, soybeans and sunflowers into fuel uses much more energy than the resulting ethanol or biodiesel generates.   In fact, their data found that in terms of energy output compared with energy input for ethanol production, corn requires 29 percent more fossil energy than fuel produced.

However there is hope on the horizon coming from an unlikely hero, algae. Exploration of algae as a potent biofuel is exploding. Many companies and Universities are researching various methods and strains of algae to solve the world’s fossil fuel dependency problem. It is estimated that algae cultivated in open ponds could yield about 10,000 gallons of oil per acre. It is considered a “carbon neutral”? fuel because algae requires CO2 gas to grow.   90% by weight of the algae is captured carbon dioxide and as it grows it releases oxygen into the air, but the CO2 gas does finally get released when the fuel is use. For about 15 years up to 1996, the U.S. government took an active roll researching algae’s potential, but continually ran into problems. Open ponds used a lot of water; it was difficult to keep contaminants out of the ponds; and the overall costs versus the amount of oil collected compared to the price for fossil fuels just didn’t add up. However with the current price of crude oil reaching more than $100 a barrel on the stock market; the realization that within 50 years the planet’s supply of petroleum will be exhausted; and the rising interest in environmental causes; algae is getting a second look. 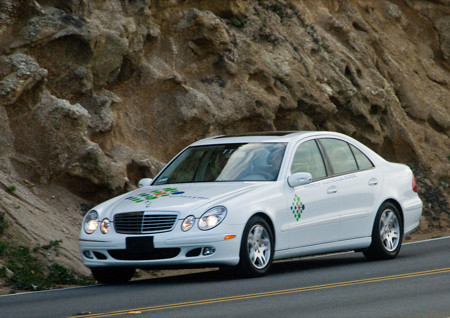 Recently in the news, Virgin Atlantic became the first airline to fly with biofuel. On Sunday February 24, 2008, a Boeing 747-400 flew from London to Amsterdam with a 20% mixture of biofuel derived from coconut and babassu oil in one of its four tanks. Richard Branson said, “the historic flight marks the first step toward reducing the airline industry’s carbon footprint.” Branson and Boeing don’t think that using coconut or babassu oil is a realistic option for regular commercial use for the transportation industry because the quantity needed would deplete arable land, contribute to deforestation and drive up food costs. This is why they are spending “lot of time and money investigating algal fuels because commercial fuel will almost certainly be derived from algae.”

Also in the news, at the 2008 Sundance Film Festival a Mercedes Benz C320 diesel demonstrated the “first real-world road test of biodiesel made from algae”, developed by Solazyme, a California Biotech firm. Solazyme is featured in the Josh Tickell’s film “Fields of Fuel,” a documentary about renewable fuel. Algae is considered a promising source of fuel because many species contain high amounts of oil that can be extracted, processed and refined into fuel. They also are abundant and grow quickly, feeding on carbon dioxide and releasing oxygen. 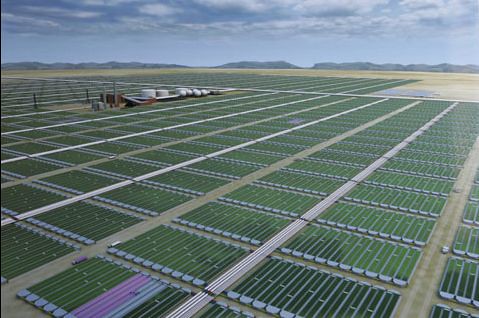 Probably the most exciting research with algae is being carried out by scientist Glen Kertz in El Paso, Texas with Vertigro. Algae is grown inside of high-density bioreactors constructed from plastic sheeting inside of a greenhouse. Flow paths formed within the plastic sheeting allow water and algae to constantly circulate through the system. Algae can reproduce six times in a 24 hour period, so it grows very quickly and is constantly being syphoned off. The algae is then refined and the oil is extracted, but nothing is wasted. The benefits to Vertigro are numerous. First, since the plastic sheeting is hung vertically, 100,000- 200,000 gallons of oil per acre can be produced. Second, the greenhouses can be placed on non-arable land as long as it receives plenty of sunlight, so deserts are a perfect location. Third, it uses a minimal amount of water because it cycles the water through a closed circuit system. Forth, the biomass that remains after the oil is extracted can be used in various ways. Lastly, with Vertigro, there is no need for heavy farm equipment that pollutes the air to harvest the algae. The algae is easily collected in receptacles.

In an interview with Scott Fulbright, a recent graduate from Michigan State University and research assistant with Valcent, he was able to answer some questions regarding the Vertigro project.

Q: If the greenhouses that you use to grow your algae is located out in the desert on non-arable land, where is the quantity of CO2 needed to grow the algae coming from?

A: At this point we are using CO2 tanks and injecting our closed reactor. There have been previous studies utilizing CO2 sequestered from breweries and flue gas from industrial areas. People want to grow algae on non arable land, next to factories for this reason. However, in order for algae to be financially viable at this point, “algae cake” or dried biomass after oil extraction must be used for other applications. An example being, feed for livestock. Flue gas contains some nasty chemicals that would not allow for ingestion to be safe. However, numerous companies and universities are advancing technologies in hope of making this viable in the near future.

If the United States places more emphasis on carbon credits, algae could also be a lucrative industry in capturing CO2 from the atmosphere. There are companies all over the world being fined billions of dollars a year because of their large amounts of CO2 emissions. What’s better than saving money, reducing CO2 while creating a clean fuel?

Q: I did not know about the flue gases and the chemicals that would contaminate the biomass. Is it correct that another use for the biomass would be as fertilizer? Anything else?

A: Yes, it can be used as fertilizer as well. Also, there are some organizations that use certain algal cells in cancer inhibition drugs.

Q: Are using CO2 tanks realistic moving forward? Are they costly or is your company investigating alternatives to using the CO2 tanks?

A: CO2 tanks are presently injecting CO2 and will not be finically realistic with several acres of algae reactors. We are collaborating with an engineering firm studying the viability of flue gas and breweries. Several companies around the world have used both. Technology is progressing giving us confidence that this component will be successful.

Q: About a week ago Virgin airlines flew its first commercial flight using a mixture of 20% biofuels with petroleum based fuel. In the article Boeing and Richard Branson mention that Algae Biofuel is the only realistic viable source to be used in air transportation and that they are putting a lot of time and money into the development of this technology. Do you or anyone at Valcent have any comments on this and do you have any projections on when Algae Biofuel may be put into commercial use?

A: Biodiesel and jet fuel are the primary fuels we are looking at. The length of the lipid carbon chains will differentiate the kind of fuel we can produce. Obviously we do believe algae fuel is a reality and could play an instrumental role in the replacement of fossil fuels. It’s tough to say when this will become a commercial system because there are so many intricate parts to work out.

Presently we consider ourselves a research and development company working on trying to perfect the reactor itself. One of my jobs is go around the country taking samples to bring back to the lab. We then can use lab instruments to display growth rates and lipid content in the specific algae species. Finding the right species is also a major component in creating a successful reactor.

Q: Does the variety of algae that you use effect the carbon strands that it is capable of producing? For instance, do you think that Algae oil possible to produce C3- C12 for gasoline or mostly C12 – C16 for Kerosene?

A: Yes, various species of algae will yield lipids with differing carbon chain lengths. We are not looking at gasoline at this point, but focus is on biodiesel and jet fuel. We are still setting up a lab to differentiate the carbon chain lengths. I would say C8-C20 is what we will be interested in.

Q: If you are ever in Southern Oregon on your travels would you be willing to talk some of the students at SOU about the research that your company is doing with algae? I know that it is a complete long shot, but it never hurts to ask.
A: I will definitely let you know if a member of our company will be heading up to Oregon, but it probably is a long shot. Never hurts to ask though.

Job Openings are Near a Record High